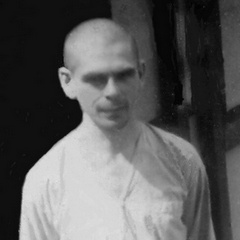 Editor’s Note: The following was written by Bhikkhu Ñāṇatusita and Bhikkhu Bodhi shortly after the passing away of Ven. Ñāṇavimala. It was first published in the Buddhist Publication Society’s Newsletter in 2005. It has the most complete account of Ven. Ñāṇavimala’s life story to date. Two other articles about the venerable monk can be found on this blog: Ajahn Brahm meets Ven. Ñāṇavimala and Chittapala’s Ven. Ñāṇavimala’s Advice.

Next week I will follow up this post with a new piece about Ven Ñāṇavimala by Bhikkhu Bodhi, entitled A Mahākassapa for our Time.

I am very grateful to Ven. Ñāṇatusita for allowing me to reproduce it here, and also for the photographs which he kindly provided.

After a long period of physical weakness, on the 10th of October 2005 the highly respected German bhikkhu Ñāṇavimala Thera, aged 94, passed away on the island of Parappaduva in the Ratgama Lagoon near Dodanduva. Ñāṇavimala Thera was the last living disciple of Ñāṇatiloka Thera (1878-1957), who was himself the first Buddhist monk from Continental Europe. Thus, with his passing away, an important chapter in the history of Western Buddhism has been closed.

At the time of his death, Ñāṇavimala Thera was the oldest as well as the most senior Western Buddhist monk in the world. He was highly respected by monks as well as laypeople and many people believe that he attained the highest stage of Buddhist sanctity. For the last years of his life he was bedridden and continuously cared for by one or two dedicated attendant monks. He stayed in almost complete seclusion on the former nuns’ island Parappaduva, near the Island Hermitage in the lagoon at Dodanduva. 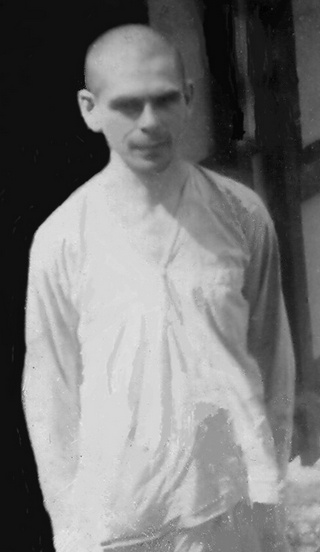 In lay life Ñāṇavimala’s name was Friedrich Möller. Born in 1911 in Hessendorf bei Rinteln, he was spiritually inclined from an early age. Although he was first a Christian, a meeting with an Indian medical student in Germany aroused his interest in yoga and Hinduism, and he decided that he wanted to go to India to further his new religious pursuits there. Because the German military was preparing for war and needed many recruits, it was generally quite difficult for German men to leave the country, but three or four years before World War II, Möller managed to arrange for the trading house in Hamburg at which he was employed to send him to Mumbai in India to work as a trader. About a year before the war started, Möller was appointed the director of a German trading house in Colombo. In Colombo he led a pleasant and luxurious life, which, however, abruptly came to an end with the outbreak of war in 1939. Along with many other German male nationals living in British colonies, Möller was arrested by the British government as an enemy. He was first interned in Diyatalava in the Sri Lankan hill country and then, early in 1942, was sent to the large and fairly comfortable “Central Internment Camp” near the town of Dehra Dun in northwest India. He was placed in the same wing as Ñāṇatiloka and his German pupil Vappo, where he built up a friendship with them.

Being a strict vegetarian, Möller refused to eat the non-vegetarian food served in the camp and almost died because of this. On the brink of death, he took the advice of his Buddhist friends to give up his vegetarian views and quickly recovered. Later, while recounting this experience, he said that he then understood the wisdom of the Buddha in not promoting vegetarianism. Here, in the internment camp, he became a pupil of Ñāṇatiloka and a devout Buddhist.

In November 1946, most of the German inhabitants of Dehra Dun were repatriated by the British to Hamburg in the British occupied area of Germany. Thanks to the efforts of the increasingly politically powerful Sinhalese Buddhists and several of their organizations, Ñāṇatiloka and the other Buddhist monks were spared the return to the misery of a bomb-ravaged Germany and were able to return to Ceylon. Friedrich Möller, however, had to go to back to Germany despite his strong desire to become a Buddhist monk in Ceylon. He was not eligible to do so because he had not been a Buddhist monk in Ceylon before the war. Möller first worked on a farm in the countryside near Hamburg. The only remuneration he received was free food and lodging, but this was his only alternative to going hungry. After some time, however, he found work as an English teacher in Hamburg and could stay with his former landlady, who treated him like the son she had lost during the war. Many German men had died during the war and the large majority of Möller’s pupils were females. Möller was able to resist the temptations of sensuality and romance because he was firmly determined to return to Ceylon and become a monk.

He became involved with a Buddhist group in Hamburg. One day in 1953, in a hotel in Hamburg, he had to translate from English into German a speech given by Asoka Weeraratna, the founder of the German Buddhist Missionary Society (Lanka Dharmaduta Society) in Colombo. Weeraratna and Möller agreed that he would come to Ceylon with the support of the Dharmaduta Society, which would arrange for him trained in missionary work for three years before returning to Germany with the first German Buddhist Mission.

After an absence of almost thirteen years, Möller returned to Sri Lanka, arriving in Colombo on June 1953. He lived for a year at the Dharmaduta Society in Colombo and also spent time at the Forest Hermitage in Kandy. He moved from Colombo to the Island Hermitage and, at the age of forty-three, was accepted as a novice by Ñāṇatiloka on the 19th of September 1955, taking the Pāli name Ñāṇavimala. As Ñāṇatiloka’s health was declining, he put the novice under the care of Ñāṇaloka, the abbot of the Island Hermitage. It was Ñāṇamoli, however, who especially helped him by teaching him Pāli and explaining the monk’s rules and other aspects of the monk’s life. Exactly two months after his novice ordination he received the higher ordination with Madiha Paññasīha as his preceptor. Then, he realized that he first had to work on himself and did not regard himself capable of being a teacher for others yet. He decided to stay on in Sri Lanka. He later related that this change of mind had been brought about by conversations he had with Ñāṇamoli. The Dharmaduta Society respected his wish.

For ten years Ñāṇavimala lived quietly at the Island Hermitage, completely dedicating himself to study and meditation. He was studying the Pāli suttas and put the understanding he gained into practice. He generally kept to himself and had little contact with others. Then, in 1966, he left the Island Hermitage to go on a walking tour (cārikā) through Sri Lanka. For about twenty-five years he walked all over Sri Lanka, from south to north and back, from west to east and back. He would normally stay in monasteries and other places on the way for at most three days at a time and would then continue walking. The aim of his austere practice was to avoid accumulating possessions and mental attachments to places and people. When staying in a place for a long time various attachments can easily build up which can be in conflict with the Buddhist monk’s state of being a “homeless one.” Ñāṇavimala would only carry his alms bowl and a small bag with some essential requisites. He did not even use sandals. Once, robbers came up to him and investigated his bag, but, finding nothing of value, left empty handed.

To be even more free and detached inside, Ñāṇavimala would normally have no fixed destination. Once, he had been staying for a few weeks at the Siri Vajiraramaya temple in Colombo. One morning he left the monastery and was walking down Vajira Road towards Galle Road. A supporter of the Siri Vajiraramaya saw him walking down the road, came up to him and saluted him. Seeing his bag and bowl slung over his shoulder, he realized that he had left the monastery and said to him: “Well, venerable sir, I see you’ve decided to leave the monastery and resume your travels. Where are you heading?” ” Ñāṇavimala promptly replied: “I haven’t decided yet. I’ll decide when I get to the corner.”

He would collect his food by going on almsround (piṇḍapāta) in villages and towns along the way. Only during the rainy season retreat (vassa) would he stay put in a monastery for three continuous months, in accordance with the prescribed rule; most often he would spend the rains at the Island Hermitage. To undertake such a difficult ascetic practice for a long time can be quite physically demanding even for young monks, how much more so for an elderly monk. Nevertheless, Ñāṇavimala persisted with this practice up to 1991, although after 1987 a hip affliction prevented him from walking for long stretches at a time. He then spent 4 years in Colombo at the Siri Vajiraramaya monastery. In 1995 he returned to the Island Hermitage, and later moved to the more secluded island, Parappaduva, where he expired.

When he met people, Ñāṇavimala would encourage them to practice the Dhamma with the Suttas as a guide. Again and again he emphasized that the practice of the Dhamma, a simple renunciant lifestyle, and the giving up of all worldly attachments will lead one to the supreme bliss of Nibbāna. His own renunciant lifestyle and mental well-being certainly exemplified his advice to others. He inspired many younger monks and, when he still had physical strength, was happy to give wise counsel to them on how to live the bhikkhu life to best advantage. One hesitates to say, “May he attain Nibbāna!” since he might well have already done so, but since that is the tradition, let us add our voices to the chorus and say: “May he attain Nibbāna!”

2 thoughts on “The Life of Nyanavimala Thera”