These past few weeks I have been working on improving a table of the Suttapiṭaka I first published on the Ancient Buddhist Texts site around 3 years ago. The database I used at that time was based on a list on suttas by Leigh Brasington, which in turn was based on PTS editions. I have scrapped that page entirely, as there were too many mistakes in it, and it was only a partial list anyway, and included only the four nikāyas, to which I had added the Jātakas.

I went back to the beginning and working with the Chaṭṭha Saṅgāyana texts, and the Sutta Central website, I have rebuilt the index to include virtually all of the five nikāyas, with links to both Pāḷi and English translations (the Index links go to pages with even more translations and parallels).

The table can be filtered down by entering text in the filter box, so if you remember only a part of a sutta name, you should still be able to find it OK. The filter box accepts diacritics, which will give more precise results or can be used without diacritics to give a fuzzy search.
The table can also be used to gain an overview of various nikāyas, books, sections etc. in the Suttapiṭaka, or as a quick lookup when searching for a sutta name or number.

I have added in variant names when I know of them, so sometimes filtering may give more than one name, examples are filtering for ‘DN 31’ will turn up two entries: DN 31 Siṅgālovādasuttaṁ (Burmese, PTS), along with its variant spelling DN 31 Sigālovādasuttaṁ (Laṅkā). Similarly filtering with ‘MN 26’ with turn up MN 26 Ariyapariyesanasuttaṁ (Laṅkā, PTS), and MN 26 Pāsarāsisuttaṁ (Burmese).

The table therefore fulfils three separate functions: It is an overview of the Suttapiṭaka, a quick lookup for names and numbers, and contains links to online resources, including text and translation. I very much hope this will help students and make their research that much easier. 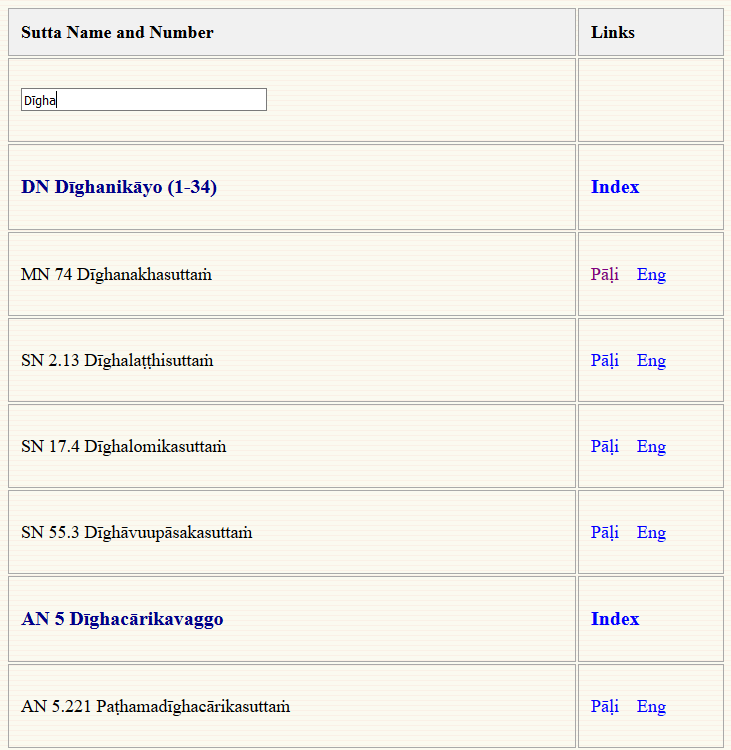