Editor’s Note: This extract reconstructed by E H Johnson from the Chinese and Tibetan versions of Chapter 14 of Buddhacarita by Ven. Aśvaghoṣa describes the Buddha’s penetration of conditional origination on the night of his Awakening.

It is unusual in that it first follows the outline of the Mahānidānasutta (D. 15), where consciousness and name-and-form are said to rely on each other; but afterwards the normal 12-fold exposition, with consciousness proceeded by saṁskāra and avidyā is given.

As Johnson sometimes has idiosyncratic translations I have added in what I believe must have been the original Sanskrit terms in brackets for clarity’s sake. The first 14 chapters of Buddhacarita, together with the Sanskrit interweaved, can be found here.

49. Then as the third watch of that night drew on, the best of those who understood trance (dhyāna) meditated on the real nature of this world:—

50. “Alas! Living creatures obtain but toil; over and over again they are born, grow old, die, pass on and are reborn.

51. Further man’s sight is veiled by passion (rāga) and by the darkness of delusion (moha), and from the excess of his blindness he does not know the way out of this great suffering.”

52. After thus considering, he reflected in his mind, “What is it verily, whose existence causes the the approach of old age (jarā) and death (maraṇa)?”

53. Penetrating the truth to its core, he understood that old age and death are produced, when there is birth (jāti).

54. He saw that head-ache is only possible when the head is already in existence; for when the birth of a tree has come to pass, then only can the felling of it take place.

55. Then the thought again arose in him, “What does this birth proceed from?” Then he saw rightly that birth is produced from existence due to the power of the act (karmabhava).

56. With his divine eyesight he saw that active being (pravtti) proceeds from the act, not from a Creator (Iśvara) or from Nature (Prakti?) or from a self without a cause.

57. Just as, if the first knot in a bamboo is wisely cut, everything quickly comes into order, so his knowledge advanced in proper order.

59. This act arises from appropriating the various vows and rules (śīlavrata) of life, sensual pleasures (kāma), views of self (ātmavāda) and false views (dṣṭi), as fire arises by appropriating fuel.

60. Then the thought occurred to him, “From what cause does appropriation come?” Thereon he recognised the causal condition (pratyaya) of appropriation to lie in thirst (tṣṇā).

61. Just as the forest is set ablaze by a little fire, when the wind fans it, so thirst gives birth to the vast sins (kleśa) of sensual pleasure and the rest.

62. Then he reflected, “From what does thirst arise?” Thereon he concluded that the cause of thirst is sensation (vedanā).

63. Mankind, overwhelmed by their sensations, thirsts for the means of satisfying them; for no one in the absence of thirst takes pleasure in water.

64. Then he again meditated, “What is the source of sensation?” He, who had put an end to sensation, saw also the cause of sensation to be in contact (sparśa).

66. Next he considered that contact has a cause. Thereon he recognised the cause to lie in the six organs of sense (ṣaḍāyatana).

67. The blind man does not percieve objects, since his eye does not bring them into junction with his mind; if sight exists, the junction takes place. Therefore there is contact, when the sense-organs exists.

68. Further he made up his mind to understand the origin of the six organs of sense. Thereon the knower of causes knew the cause to be name-and-form (nāmarūpa).

69. Just as the leaf and the stalk are only said to exist when there is a shoot in existence, so the six organs of sense only arise when name-and-form is in existence.

70. Then the thought occurred to him, “What is the cause of name-and-form?” Thereon he, who had passed to the further side of knowledge (jñāṇa), saw its origin to lie in consciousness (vijñāṇa).

71. When consciousness arises, name-and-form is produced. When the development of the seed is completed, the sprout assumes a bodily form.

72. Next he considered, “From what does consciousness come into being?” Then he knew that it is produced by supporting itself on name-and-form.

73. Then after he had understood the order of causality, he thought over it; his mind travelled over the views that he had formed and did not turn aside to other thoughts.

76. Just as redhot iron causes grass to blaze and as blazing grass makes iron redhot, of such a kind is their mutual causality.

77. Thus he understood that from consciousness arises name-and-from, from the latter originate the senses and from the senses arises contact.

79. From exixtence comes birth, from birth he knew old age and death to arise. He rightly understood that the world is produced by the causal conditions.

80. Then this conclusion came firmly on him, that from the annihilation of birth old age and death are suppressed (nirodha), that from the destruction of existence birth itself is destroyed, and that existence ceases to be through the suppression of appropriation.

83. Similarly the great seer understood that the factors are suppressed by the complete absence of ignorance (avidyā). Therefore he knew properly what was to be known and stood out before the world as the Buddha. 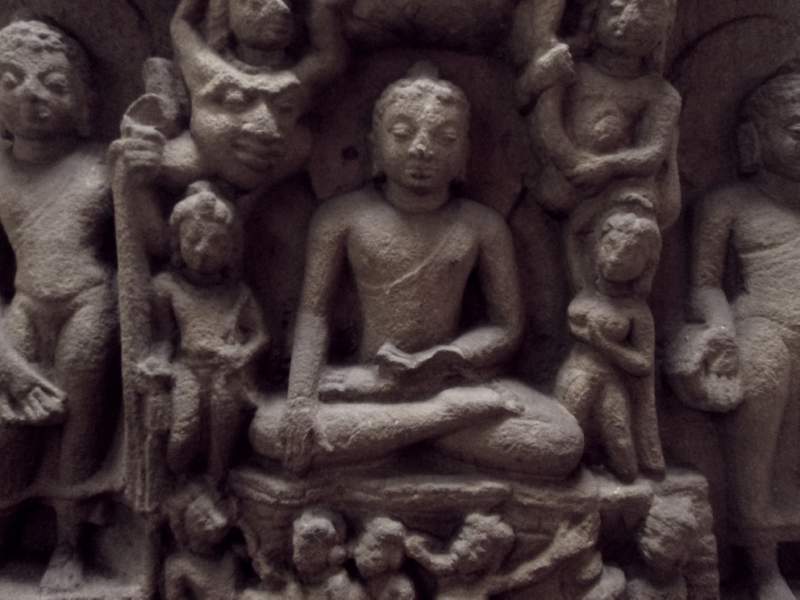