It may be an idea to have a look at the newly published album of photographs from the trip this post describes first.

On the final day of the pilgrimage to India four of us staying at the same monastic guest house decided to go to see the Barabar cave area, north of Gaya in the Jehanabad district, and the nearby village of Kawa Dol, where a magnificent (but damaged) statue of Buddha is situated.

We made up a quartet from the diaspora: myself, an English monk resident in the East for around 25 years; SawSian, a Malaysian lady doctor who lived in England for 14 years; Neal, an ethnic Sri Lankan/Thai born in Malaysia and Ven. Lhundup Dorjee, a Bhutanese monk born in India, who has never been to his homeland.

The caves themselves are only secondarily connected to Buddhism, having been built by Emperor Asoka and his grandson Dasaratha for the Ājīvikas, a sect founded by one of the six famous teachers mentioned in the discourses, Makkhali Gosāla, who had broken from the Jain leader Mahāvīra. The Ājīvakas themselves had a fascinating history, [1] and lasted longer in India than the Buddhists, but when they died out there, their teaching died with them. 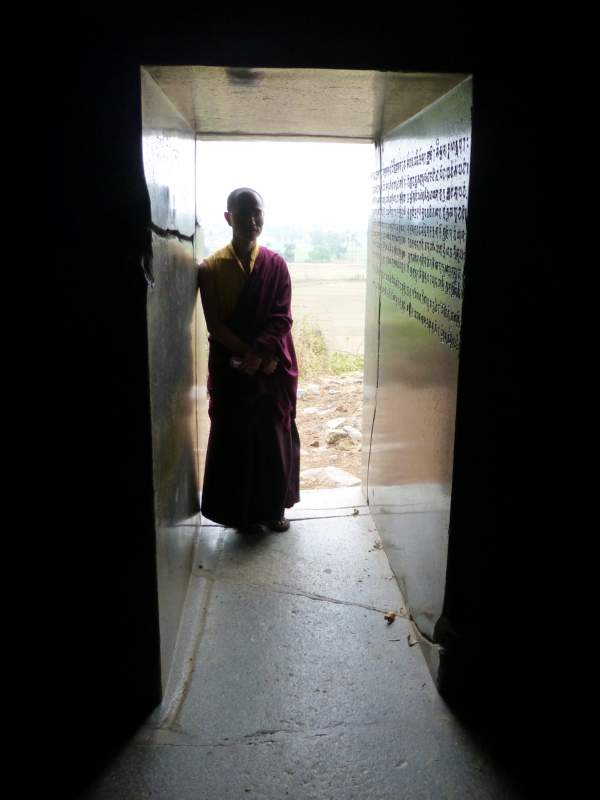 The Nāgārjuni caves were later inhabited by monastics from other sects, including Buddhists, the most famous of whom was reputedly Nāgārjuna, whom the first hill in the range is now named after. But there main inportance lies in the fact that they are the earliest rock-cut caves in India, and formed the precedent for other cave complexes like Ājānta and Ellora.

We started early, around 7.00am, as I feared the heat of the day would make climbing the hills too difficult. In fact though the weather, for the first time on the trip, was overcast. This was very fortunate for us as I think the climb to the top of the Barabar hill would never have been undertaken otherwise.

We first visited the Nāgārjuni hill and the so-called Gopi cave. The car dropped us around 1/2 kilometre from the hill and we walked across the fields and started the short climb up the rock-hewn steps. The cave is fairly unadorned from outside, presenting just a rectangular hole in the rock face, but has two inscriptions, one above the doorway, and one along the entrance, which appears to be later.

Inside the atmosphere is compelling, and there is a deep echo whenever someone speaks. It is so profound I had the idea that it could even echo one’s thoughts if they got too loud during meditation. We asked Ven. Dorjee to do some chanting, and he appropriately chanted the Prajñāpāramitā teachings. Here is a video I made of it, although I have to apologise for the low quality, as I had the wrong settings. 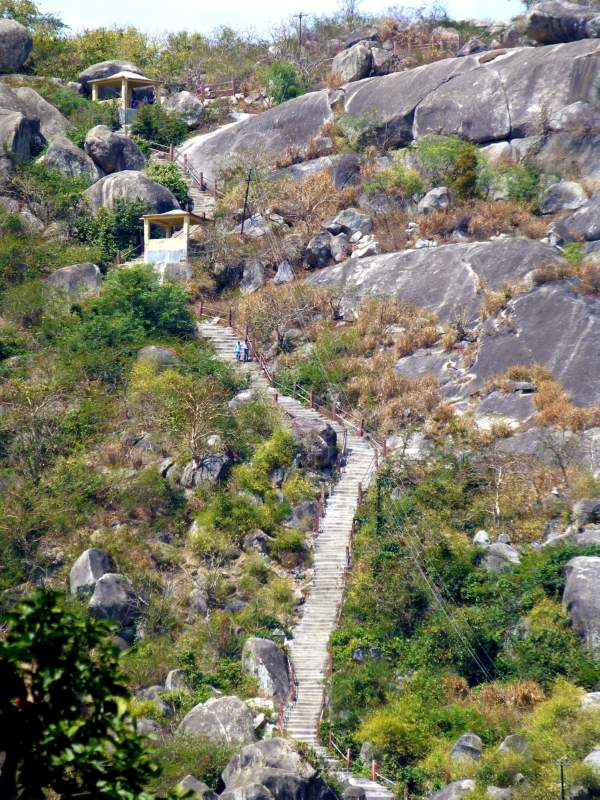 When we left the cave (not knowing there were two more caves on the hill to be seen) we immediately made for the Barabar Hill itself. That was quite a long walk as we had to get almost behind it to find the path up. We had been warned about dacoits operating in the area, which the guidebooks also mention, but had been assured by our driver that there were police on patrol, though when we arrived there were no police to be seen anywhere, of course.

The Siddheshvarnāth Shrine on the top could be seen from the bottom of the hill, and after passing a small hamlet we started the long climb. Ven. Dorjee wanted to discuss the relationship between the Theravāda and the Mahāyāna, so between breaths we carried on a discussion about their varying viewpoints.

Meanwhile men with lathis (long sticks) were passing by and the group had got separated in one way or another, and I kept holding back trying to reassemble the group for safety purposes, though fortunately there were no incidents, and everything proceeded without trouble.

On the way up we were came across wayside relief-carvings and sculptures. Most of the carvings were lingas, with the occasional Ganesh, and the sculptures were mainly of unidentified Hindu gods. Some of the materials may originally have been Buddhist, but if so they were now dressed up as gods.

At the top of the Hill we entered the temple compound. There was a family doing a furious pūjā by the side of the temple, and one of the pūjāris took us into the temple to see the various gods. There were a couple of ladies doing pūjā to the main idol, but all the photos I took were blurred by the speed of the ārati.

The hilltop commands a wonderful view out over the rugged countryside around, granite hills with rocks piled on top of each other, often quite precariously. Having photographed most of the shrines and landscapes, and paid our baksheesh, we began the descent down the other side. This was a better made stairway, but had less by way of reliefs and sculptures.

At the foot of the hill lies one set of the Barabar caves excavated by Emperor Asoka, consisting of the Lomas Rishi cave, with its beautiful carved doorway and the Sudama cave farther along the rock face, which was the first to be completed in 252BC. On the other side is another, which may have been the Viśvamamitra cave.

We had been climbing up and down mountains for half the day and I had missed lunch by the time we got down to the local food stall, but strangely enough, even though I had only eaten two parathas in the morning, had walked around 3-4 km up- and downhill, and had nothing to eat after noon I didn’t feel hungry at all that day. 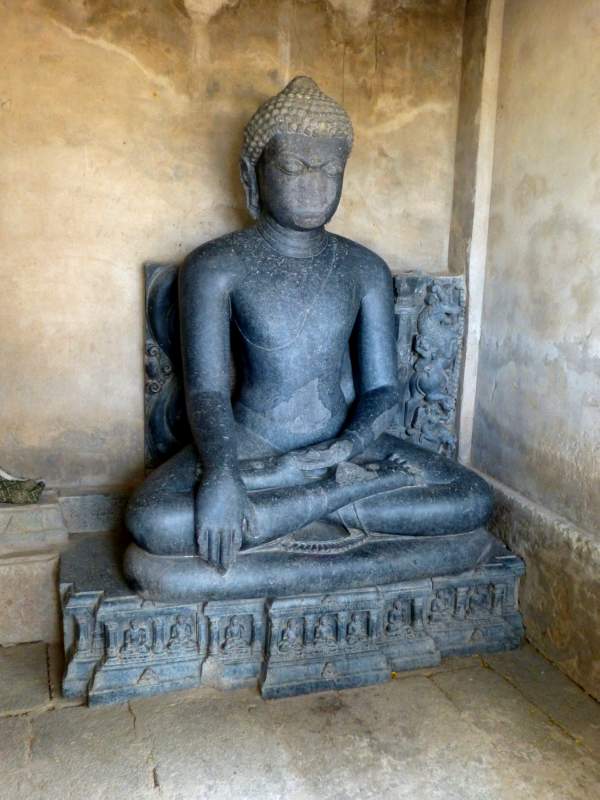 We got back into the car which had driven round to meet us and then insisted on going to Kawa Dol, which, because of difficult roads and a broken bridge, the driver had been trying to avoid. We managed it by going on a detour, which, although difficult, was worthwhile. The road was completely broken up and useless, but at least it went between the fields, rather than over them 🙂

We arrived at the village and were surprised to see many reliefs on the rocks right in the village itself. One of the best examples was also being used as the local outside toilet so care was needed when trying to get closer. There is a suggestion that the area may have been a ouside atelier at some point.

We drove up to a walled off area where we could see a small makeshift building. As we could see by the columns lying about, this had previously housed a medium size temple. Inside was a very fine and large Buddha image. It has been defaced but it is still impressive, and judging by the inscription must date to around the 8th century. After we had finished at the temple and had another look at the toilet it was time to head back to base. The following day Neal and myself faced the first of three flights on three successive before arriving back in Malaysia.

High-definition photographs from the trip can be viewed here.